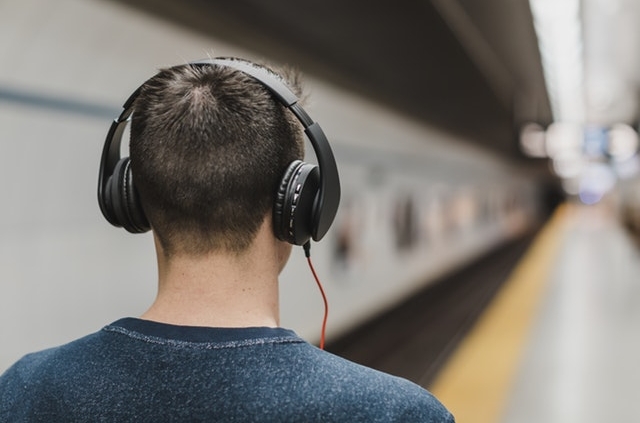 I never thought I’d ever become a podcast person. No images? No videos? Just a voice talking to you? It sounded pretty bland to me, and I didn’t think it could capture my attention.

That is, until I decided to give one a go. And then another. And I quickly fell in love with them—they were perfect for winding down after a long day, as an alternative to watching TV in bed (and a healthier one in my opinion), and while making my way to and from work, which is quite a long and boring trek for me.

I found myself laughing out loud on public transportation, tearing up at 7 AM in the morning, and telling everyone I knew they had to listen to so and so episode right this second. (In related news, have you heard This American Life’s “Captain’s Log?”) Basically, they’re the perfect mix of entertainment and education—and they’re completely free!

So, if you want to try one out, learn something new to tell your co-workers (hello conversation starters!), and even become better at your job (yes, there are podcasts for that), check out what The Muse team is listening to right now!

Fresh Air always has great, in-depth interviews, and I love the wide range of people it features on the show. Terry Gross has been interviewing people for so long, so she’s awesome at researching her interviewer and asking them a wide range of questions. She also asks them direct questions (a.k.a., she doesn’t beat around the bush). And her voice is also really soothing to wind down after work. The episode I recommend is with John Krasinski—he talks about his start as an actor, and how he got his break on The Office.

2. Reply All by Gimlet Media

It’s a podcast about the history of the internet, and all the quirky things people have done with it since its invention. I recently listened to a fascinating episode about the inventor of the pop-up ad, and how he feels like he ruined the internet with it.

If you love stand-up comedy, you’ll like this podcast. It actually makes me look forward to Mondays. It’s like going to the bar with your friend after work and hearing him rant about the stuff going on in the world, be it pop culture, politics, or sports—in a hilarious way. Once in a while his wife Nia will join in and add some good opinions and laughter. There are two episodes each week, Mondays and Thursdays.

I became kind of obsessed with Elizabeth Gilbert after reading her latest book, Big Magic: Creative Living Beyond Fear—which is all about powering through the challenges of being creative to do great work—and so was thrilled to find out she was starting a spinoff podcast. In each episode, Gilbert is helping an individual figure out how to deal with his or her creative blocks, calling on the likes of Martha Beck and Neil Gaiman for extra inspiration. While the podcast is geared toward artists, I think the advice can be powerful for anyone looking for more creativity or confidence in his or her work!

5. How To Build The Future by Y Combinator

As someone who values building great products, it’s super valuable to hear from other people who have built super valuable products and their views of the world. And as someone who really believes that software is eating the world, it’s super helpful to hear how the people who have built amazing software think about the world around them, and how they were able to build great things. I highly suggest everyone listen to the Mark Zuckerberg episode.

This is hosted by two culture writers from the New York Times, Jenna Wortham and Wesley Morris, who talk about pop culture, entertainment, politics, and more. They’re only a few episodes in, but their thoughts about the movie When the Bough Breaks is hilarious and their interview with RuPaul during episode three is so refreshing.

This show covers the journeys former presidents took to get into The Oval Office, their personalities, and their decisions while in office. Best of all, the host always asks, ‘What would a blind date with this person be like?’ which is a great way to get insight into what these historic figures were like outside of the public sphere.

I like this podcast because the guys who run it have a ton of passion for fantasy football and for entertainment. I listen to a ton of podcasts, but this one is different in that the hosts aren’t jaded by the need to put out a set number of shows a week—they’re completely dedicated to their community and to quality production, which goes a long way in a somewhat niche market.

I listen to this a few times a week. I don’t consider myself a Buddhist, but Buddhist thought resonates with me a lot. It was initially surprising to me how correct and relevant the teachings of Buddhist monastics are for modern secular life. I suppose we all have the same human mind. Ajahn Amaro (in my opinion) is one of the best!

Thompkins is an incredibly funny interviewer. The basic format for this show is that he has really funny improvisers, as well as one special guest, to do a long-form improv together. It’s a very fun way to get my mind off the mundane tasks that I sometimes have to do at work. I recommend you check out episode #60 with Jon Hamm.

11. The Limit Does Not Exist by Forbes

This show’s about choosing your path, and why you shouldn’t limit yourself in your career. The two awesome hosts focus on interviewing people they call ‘human venn diagrams,’ who have a foot in more than one industry. Each episode is an inspiring take on expanding your creativity, your curiosity, your skill set, and your goals and ambitions—and they host some pretty amazing people in the career space.

I’ve recently been enjoying this podcast with Matt Gourley and Mark McConville. They do commentary on women’s rec league basketball games in LA for a team called the Pistol Shrimps, and know absolutely nothing about sports—so hilarity ensues. In the last offseason, they called the shots for mini-golf games with the Pistol Shrimps players.

13. Note to Self With Manoush Zomorodi by WNYC

It’s a smart and insightful look at how we use technology and its effect on modern life. There are so many aspects of modern technologies (from phones and iPads to emails) that are only just now beginning to be researched and that so many people don’t understand fully. Things like what’s the deal with crazy privacy policies, or is your phone listening to you? Plus, there are several really great themed episodes about mothers in the workplace (‘Taking the Lead’) and how to stop information overload (‘Infomagical’). And they’re short—20 to 30 minutes long—so perfect for when you’re running an errand or working on a semi-mindless task.

To quote the NPR podcast’s official description, ‘It’s about the big questions and hard choices that are often left out of polite conversation.’ It manages to be both incredibly interesting and educational all at once, and I always walk away with a better understanding of other people’s lives. Not to mention, it provides great filler when you’re stuck in a boring conversation.

I enjoy this podcast because they talk about things that influence everyone’s day to day life but never really stop to think about. The hosts do a great job of looking at the topic from the perspective of science and society. Often, I finish each episode with a different understanding of a previously held assumption or belief. My favorite episode so far was ‘The Problem with the Solution.

And my suggestion? Millennial by Radiotopia—it’s perfect for 20-somethings who are trying to make their way in the world—without falling on their faces.

Article by:  Alyse Kalish of The Muse